Skip to content
There is humour for sure, there is drama, fun-action, romance, a great thrill, you’re enthused, lost and found, the questions tickle you and the answers leave you wondering, beautiful images absorbed consciously/ subconsciously, you agree with the characters, grinning at the revelations, all in all a Woody Allen film shows how deluded and smitten we are with this one thing called life.
Each film of his, that I have seen till now, talks about life – a journey his characters embark upon, going through myriad emotions, dreaming and deceiving themselves, somehow finding a way back… or perhaps not, and in the end reaching a new place, different and changed… or perhaps not. Life like!
The story completes a circle every time… for the viewer at least. Certain scenes stay glued in the mind, we play them back repeatedly. The witty, satirical, punned dialogues make his films an absolute hoot.
My all-time favourite, Annie Hall, begins with Woody Allen as Alvy Singer telling a Groucho Marx’s joke –
“I never want to belong to any club that would have someone like me for a member.”
And this is exactly what we experience throughout the film. He feels unsatisfied if he gets a slight feeling of satisfaction. But the film is very much about Annie Hall. Steadily, through a character who is narrating the story (Alvy) we drift towards Annie Hall; his relationship with her, his ideas about life, what Annie should do and not do –
Annie – You don’t think I am smart enough to be serious about.
Alvy – Don’t be ridiculous!
Annie – Then why are you always pushing me to take college courses like I was dumb?
Alvy – Because adult education is a wonderful thing! You meet a lot of interesting professors. It’s stimulating!
Later
Alvy – Adult education is such a junk, the professors are so phony… how can you do it?
By the end of the film, Annie Hall becomes a real person, a friend and so does Alvy Singer. So simple and perfect is the story that the viewer never feels as if it was woven to be so.
Woody Allen’s films also celebrate cinema as a medium, Midnight in Paris is the crowning illustration of this point. Midnight in Paris – a film like a novel like a painting like a song like a memory.
Along with the protagonist, Gil Pender, we travel back in time and have an encounter with Ernest Hemmingway, Zelda and Scott Fitzgerald, Gertrude Stein, Henri Matisse, T.S Eliot, Cole Porter, Salvador Dali, Luis Bunuel, Pablo Picasso and many glorious others. A fantasy lived in the magical, ‘the most beautiful in the rain’ Paris.
And definitely, the reigning emotion in the film is that of nostalgia, making us ponder whether or not –
‘Nostalgia is denial – denial of the painful present… the name of this denial is “golden age thinking” – erroneous notion that a different time period is better than the one ones living in…’ 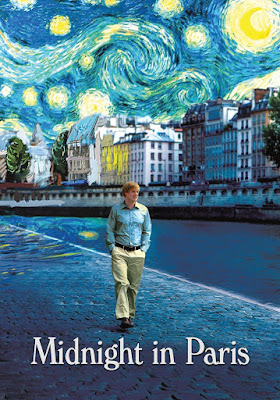 I think life is simple, funny and lovely, full of constant reminders of death and trauma. Contradictions rule us, often making life a miss-match of countless emotions. Everyone’s a magician who lives, often with one or million complex thoughts nicely daubed with understandable set of ideas and rules, with a smile on the face, doing what is supposed to be done, wondering ‘what is happening?’
Woody Allen is one such “magician”, in fact a master, watch any of his films and you’ll know what I mean. If not an answer, the question will definitely get clearer and it’ll be great fun.
Here is the list, in random order, of the Woody Allen films that I have watched and enjoyed –
Annie Hall 1977
Play It Again Sam 1972
Crimes and Misdemeanors 1989
Manhattan Murder Mystery 1993
Manhattan 1979
Take the Money and Run 1969
The Purple Rose of Cairo 1985
Cassandra’s Dream 2007
Zelig 1983
Hannah and her Sisters 1986
Midnight in Paris 2011
Blue Jasmine 2013
Match Point 2005
Vicky Cristina Barcelona 2008
Bananas 1971
{Next in line – Husbands and Wives 1992}
[The title – Meetin’ WA – is taken from the 1986 short film/ documentary by Jean-Luc Godard where he interviews Woody Allen.]
Share