Skip to content
Georgina was walking towards her home, by the same old path. With grocery bags in both her hands she could not straighten her hat or pull her hair back. She blew her hair when it tickled her nose.
It was a hot summer day, everything around her glistened in heat. Then she heard something, she could feel a vibration and as she turned her head right, she saw a wave, higher than the surrounding trees and the sweet hillocks. Georgina, dumbstruck, could not move, she kept on gazing at the giant wave devouring the trees, the hillocks and rushing towards her. ‘This can’t be true’, exclaimed Georgina. The wave hit her.
She twisted and swirled, the grocery bags somehow managed the wet blow and so did her hat. Georgina could breathe; she was not hurt rather she could swim without any effort. She looked all around with bewilderment, a school of Goldband forage fish crossed her; each one greeted her with a quick ‘hello’. Beaming, Georgina nodded and said ‘hello’; she tried to wave, but she could not, because of the grocery bags in her hands.
Georgina swam happily and was joined by two dolphins. They whistled a tune and said something that Georgina did not understand. Both the dolphins then nudged her hands and made her let go off the grocery bags. She felt light as she saw the bags sinking and touching the ‘sea bed’. Joyfully then she danced along with the dolphins. She threw her hat away and opened her hair; she swam, she swayed, she stretched her arms and flew away.
Late in the day she reached home soaking wet; grocery bags in her hands made a puddle in the kitchen and her hat added a tiny stream to it. Aghast, her mother finally managed to say ‘where in the world have you been?’ Georgina looked at her mom and with a glint in her eyes, smile on her face she said ‘the ocean’. 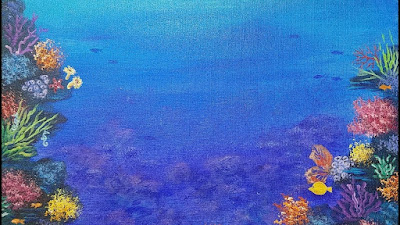